1. Before you read this, sit down.

2. Don’t miss the pictures. (Though you might not open them in front of younger family members.)

3. Kim’s mom does not know about any of this yet, so please don’t mention any of this to her. We will eventually tell her about it, but we want to choose the right timing.

We just wanted to send off an emergency prayer request to you guys – We’ve decided to send a financial update this month instead of our regular newsletter, which should be on it’s way, but we did want to send this message off quick, since a few days ago something happened to us that was rather scary and we wanted to ask for your prayers.

What happened was that while we were driving home through one of the neighborhoods we minister in on Saturday night we suddenly saw a surprise, in the form of man with an automatic rifle, who had jumped out of the sidestreet and pointed his gun directly at us, about three feet away from our front windshield. Being the perceptive people that we are, we immediately understood that this guy was the type who is interested in making a real fashion statement, since he was dressed all in black, with a black cloth over his face. After getting a good look at us, and apparently realizing that we were not the person or persons he had been intending to point his rifle at ( 🙂 !), he started motioning angrily for us to pull over, seeming to want us to get out of the truck. When he saw that we were too shocked, confused, and afraid to comply with his request, he and another man (similarly fashionably dressed) decided to approach the truck from either side, attempting to break the glass of the passenger side and driver’s side windows with the butts of their respective rifles. As we peeled off (since the first offender had courteously stepped out from in front of our vehicle), we heard several loud gunshots from behind (That would be “annoyingly loud,” to be accurate.)

As we ducked down and raced away from the sound of the gunshots the only place we could think to go to was to our friends house, who lived a few blocks away, and whom we had been originally going to visit. By the time we got there we could tell that thankfully the noise from the rifles had died down and that there was no evidence that the men had been following us. All the same, though, we jumped out of the truck and practically banged down the door of our friend, who happened to be just closing up his shop for the evening. He quickly tried to calm us down, and when we were sure that we were in no further immediate danger, he loaned us his phone to call 911 (actually “066” – again, to be perfectly accurate) at which point the operator on the other line responded nonchalantly that she’d see what she could do about things. When we called once more half an hour later, to see if it might be safe for us to leave the neighborhood, she responded that the police units were still “on their way” and that it was not a good idea for us to go anywhere, since guerrilla warfare action between two warring drug lords who were fighting for control of the neighborhood was “at a climax” that evening. (Here you may refer to the ever-witty subtitle of our article… “Oh, that’s nice to hear!”)

A few minutes later the police secretary’s report was seconded by a guy on a bicycle, who, when we attempted to warn him not to go in the direction we had come from, told us that he himself had just heard a shooting a few blocks in the other direction … So since we were feeling quite tuckered out from our adventures for that evening we decided to spend the night there, where we got a (miraculous) two hours of sleep amidst the periodic shouts and cars racing furiously down the outside street.

The next morning we showered, and (since things appeared to have calmed down) groggily made our way to a ten-year anniversary event (of all things 🙂 ! ) for our church, where (you can be sure) we did not miss any opportunity to talk with people about what had happened the night before. And as we discussed things, we learned that the area in which we minister is now being invaded by a coastal drug mafia (now challenging the formerly-dominant Juarez mafia) in response to a police crack-down they felt from the state of Durango, which happens to be the state we cross into to minister. What happened to us that night was that the coastal mafia was looking for a mid-level Juarez “pusher” in that neighborhood, and we just happened to be driving by in a truck very similar to his, neighbors say. Please pray for this man because later on that night they did actually find him and kidnap him. In hindsight we think the men who were looking for him had obviously mistaken us as being family members of his (it was dark, and it looked like we were driving his truck…). We suspect that when they detained us they were trying to kidnap us in order to obtain information on him.

Now with all that said, you might be asking yourself what our motive might be in sharing this, the latest of our adventures, with you. Could it be just a cruel attempt to make your blood pressure rise, or fall, (as the case may be)? No! The purpose of this email is none other than just to keep all you prayer warriors on your toes! That’s right! (You just knew you were doing something important up there on the other side of that border, didn’t you?)

No, seriously though, we don’t want this news to scare any of you or to scare any further groups from coming down, but we did feel it would be irresponsible not to tell you about these kinds of important changes in our ministry situation, since the neighborhood is just blocks away from our church and since in fact we have just started a home group there. Even before this incident we had started to see all sorts of interesting stuff there, like police convoys going in and out, and even a search inside our friend’s house in a scare about an alleged shooting, though we didn’t actually see or hear anything at that time. Anyway, though, apparently the fighting has broken out in full now, because we did in fact find two bullet holes in our truck the next day… 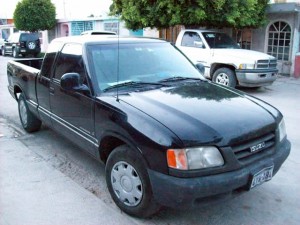 “It doesn’t look like a drug dealer’s truck, does it?” Oh, well. Anyway, does anybody want to buy a truck? We need to get at least three thousand dollars out of it to be able to buy another decent vehicle… (Alternatively, we could paint it a different color for around $400), but the real problem is that the windows are tinted glass, which is illegal here, but the tinting is not the peel off kind. We are currently looking in to having the glass in the windows changed…

From the position of these bullet holes , we can assume that the men were shooting at our tires in order to detain and possibly kidnap us. (You can see from the marks that these were not toy weapons they were shooting with.)

To see a few more photos, see the photo album of our recent adventure

Because of the way they were dressed and the particular drug dealer they were after, we can assume that these men were from the “Zeta” drug cartel faction. Apparently these guys are bona fide terrorists, recruited and trained from youth. The “Zeta” group is actually one of the groups that’s been causing trouble in Nuevo Laredo, and the ones thought to be responsible for the death of the N.L. police chief last year just hours after his inauguration. Recently the “Zetas” have been trying to get attention here in the Laguna because, as we mentioned above, the Durangan police have made them “mad.” (Here you may refer again to the subtitle of the article.)

Anyway, the reason we’re telling you all this is simply to emphasize that there is no explanation for how two highly trained gunmen could have missed taking out our tires with their automatic rifles from a mere three feet away. No explanation that is, other than the grace of God. It’s important to understand that the Zeta group takes no prisoners. The fact that they were trying to shoot at our tires that night does not mean that they were trying to avoid hurting us, but rather that they were trying to keep us alive long enough to get information about the person whose truck they thought we were driving. We tell you this not to scare you, but to honor and glorify God’s name, since we don’t know of any other precedents of people coming out of this type of encounter alive.

But God was with us that night, and we really want to give Him all the glory for His protection. Just the other day God had Kim turn in her Bible to Psalm 3 — She couldn’t remember exactly what the psalm said, until her eyes popped out as she read “But you are a shield about me oh Lord; / You bestow glory on me and lift up my head.” (v. 3) Psalm 10 is another really appropriate psalm.

So… Please pray. As we mentioned above we had already seen the signs that a situation was brewing here but did not know how to read them well enough. Apparently recently there have been quite a few people found dead, even decapitated, or missing, and there have been other sorts of threats like bomb scares and shootings, even in some of the nice residential neighborhoods. Many of the nightclubs here stayed closed last weekend and there has been talk of implementing martial law in some of the dangerous areas.

In response to this we have already adjusted our schedules, and (as we mentioned above) we’re currently working on trying to change the look of our truck in order to avoid any further “confusion” ( 🙂 ) between us and the people who might be targets of drug terrorist groups. We feel that both of these things are pretty important factors, since most people say it’s still safe to be in conflict areas in the day and early evening, and that the drug cartels don’t typically target civilians, unless they’re relatives of drug cartel members or just happen to get caught in the crossfire.

Anyway, though, we do ask you and thank you for your continual and faithful prayers. Pray for the men who detained us, that God would touch their hearts. Pray for God to provide the finances for us to paint or sell the truck. Pray for the government here, which for the first time in Mexican history is refusing to bow down to the drug lords. And pray for us, since even now God is giving us the opportunity to minister to the families of people who are heavily involved in the drug movement.

Above all, praise God with us, who by means of this incident has clearly demonstrated that nothing can happen to us which doesn’t pass through His hand…

P.S. If you’d like to know more about the “Zetas,” here’s some info from Wikipedia: “Los Zetas”