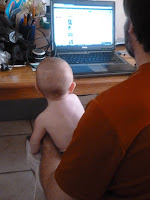 Are you surprised you haven’t heard from us in awhile…?  As you may know, we’ve been rather busy lately…  And since we usually open our letters by apologizing for the fact that it has been so long since we’ve written you, we do want to say that this time we have a good excuse…  So seeing as how we are literally typing this with a baby draped over our lap, we’d better be quick and get to the point.

Of course we’ve had a lot of adventures since the last time we wrote you, some of them even serious things that have come up in the lives of our youth — who continue to face the dangers of the street and the  perilous threats of drug lords.

…But even in the middle of all this, we did think for now that perhaps the most important thing was for you to know about a small miracle that God has sent us… 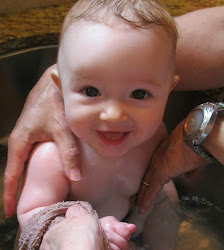 So for those of you who have not been already bombarded on Facebook by the endless pictures of our baby — we would like to announce the birth (several months later!) of Karina Lissette Flathmann.  She was born here in Torreon on March 6, 2013 at 3:56am(!), weighing 7 pounds, 6 ounces.  For those who want to know more about her, we have included an update about her below (and on the nitty-gritty of putting diapers on backwards, etc…!)  We hope to follow this update with a slightly more ministry-focused newsletter, which should come out soon…

… But for the meantime, here are our thoughts on our most recent adventure. 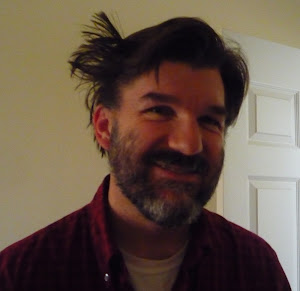 … Needless to say, after having worked with gang members for as long as we can remember, we have had our share of challenges amidst the utter joy of taking care of Karina.

Our career as parents started out as a whirlwind, since the stork came early, and Karina was born shortly after the doctor said she wouldn’t be and (not coincidentally) a week before we had the chance to finish cleaning up after major construction in our house! 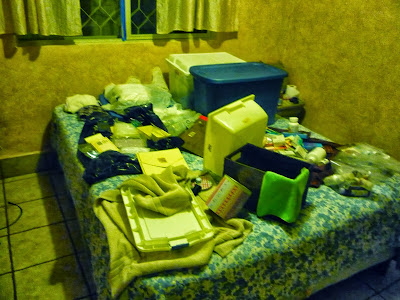 This was the state of our house the day Karina was born… (Just so you can feel like you were there…!!) 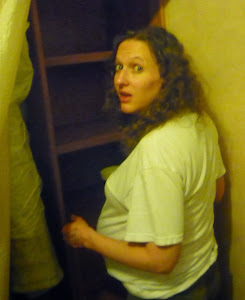 And this was Kim just before we went to the hospital! She was cleaning out the baby’s room in order to get her mind off the “Braxton-Hicks”contractions which (according to our doctor!) were no big deal.  As it turned out, though, somehow we did not get to finish cleaning out the baby room…!   Larry finally called the doctor back, while Kim stumbled into the hospital seven centimeters dilated.

…Anyway, a few minutes after Karina was given to us, we were struck deeply with the realization that we did not know what we were doing.  Our families, also under the impression that she wouldn’t be born for another week or two, hadn’t had time to get into town yet.  Certainly, they were now on their way… But for the time being we were left alone with a baby… a sweet, awe-inspiring, and  mysterious little critter that we had absolutely no idea of what to do with!   🙂 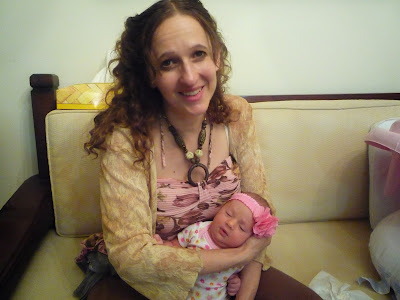 … Fortunately for Karina, both grandmothers and Kim’s father (even Kim’s sister…!) all came to our rescue and arrived within a short time.  They took about a zillion pictures and proved to be a tremendous help to us in getting through the first few weeks.

We were also given a bunch of crash courses by other friends and family on some of the latest wisdom from the U.S. about babies… Namely that you should never lay them on their stomach, their back, or their side, and also that babies’ habit of ‘spitting up’ is now called by the fancier name of “acid reflux…”  (Apparently, Karina actually does have a moderate case of acid reflux… and working our way through it has been quite interesting!!) 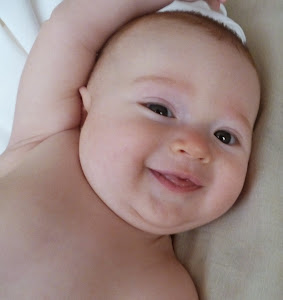 But beyond a shadow of a doubt, Karina herself has proved to be the most excellent teacher of all in helping us learn how to take care of her.  Certainly, over the past few months she has made the reality of our inadequacy as parents clearer every day, and we’ve no doubt that she’ll continue to do so for the next eighteen or twenty years.

So to make a long story short, when you put your toothbrush “away” in the open peanut butter jar (What was it doing in the bathroom…?!), you know that you have officially sunk to a new level.

Yet still, it always amazes us how such a little baby can turn everything in our world upside down with just one cry… or just one smile.  Truly, there are moments when you are totally humbled and forced to give up everything you think you know about raising a child…  And as we hold Karina’s little hand while she cries through the moments, and sometimes hours, of “acid reflux” and other such tummy troubles, we are struck with the even more difficult reality that sometimes you are unable to shield your daughter from pain… But the good thing is that you can always pray to help her through it.

… So as she grows out of a different outfit every day, and her lively little personality continues to develop every bit as fast as the rest of her, we realize that Karina is not ours.  Loaned to us for a time, she belongs to God, and He is ultimately the One who will be the Author of how He will form her for what He will do with her life…  We also realize that this “surprise” He has sent us is not so much about us “having” a baby, as it is about Him allowing us to be the stewards of another human being that He’s created.

The challenge will be to live up to the role He wants us to play as parents in the meantime – to teach her, and to learn from her, in the way that He desires.

…This is definitely harder – and yet even more wonderful – than working with gang members. 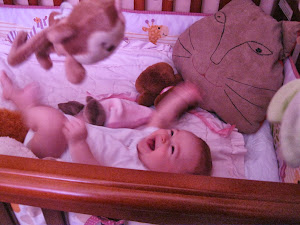