Nina was like so many of the women we see here – broken, scarred, and all but undone from the injustices that many Mexican women continue to suffer. 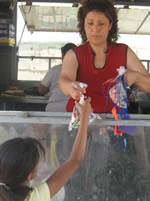 She began attending church regularly about six months ago, invited by her family, namely her brothers, since she is the only sister of the now-familiar “Rivas” brothers (Fili, Beto, Juan and Cheche). Like her brothers, Nina became involved very quickly in the body of the church, with frequent comments that she had never before experienced anything like the love of God, and showing deep gratitude for the new meaning He’d brought to her life. She began serving in the kitchen at one of our children’s feeding programs and even acting as an encourager for other members of the church.

But even in all of Nina’s enthusiasm as she drew closer to God there continued to remain a huge dark spot on her horizon: Her violent, alcoholic and drug-addict husband.

Having married at the age of fifteen, Nina had been suffering in her marriage for about 20 years. On one occasion she even confessed to us that the only reason she did not leave “Tavo” (short for “Gustavo”) was because he had threatened that he would find her and kill her if she did so.

Certainly, the evidence of Tavo’s tyranny on Nina’s life was strong, since she could only attend church meetings in secret, and lived with constant fear in her eyes of getting home late and being discovered by him. Even when Nina would take refuge in her parent’s house to avoid Tavo’s violent reactions it was not uncommon for Tavo to stand outside the house, throwing things, or screaming obscenities and then trying to break down the door.

But even though Nina endured so much mistreatment from her husband it was not the only abuse that she received. As if matters could be any worse, she and Tavo were not living alone, but with his family – with his mother and father and brothers, who tended to order Nina around, paying no attention to her suffering and even defending Tavo in his actions. Even Nina’s own family would reject and criticize her at times for not deciding to leave Tavo. When we suggested going to visit Tavo and talk to him, we were met with comments on all sides that it would be “dangerous” to provoke him or risk making him mad about anything.

Nina, however, continued to remain undaunted about one thing: She knew that she had found something, and that that something was the true God. She knew that in Him was real meaning, even in suffering. So, even though we feel sure that she had seen the opportunity at various times to just get out and leave her husband even in spite of his threats, Nina chose to do something else. She chose to begin to talk to Tavo’s family about God.

The first one who listened to her was Tavo’s sister, “Perla,” who actually surprised everybody by starting to come to church! Then Nina began working on her mother-in-law, whom she had been trying to convince for several years to support her in having Tavo sent to a drug and alcohol recovery center, but this time the hard-hearted woman saw something different in Nina, since she was talking to her about a Christian recovery home, and by a miracle of God she agreed. Thus Tavo was sent to a Christian recovery center, but even this was only somewhat encouraging, since he was taken against his will (after throwing the television set and various other things across the living room).

But Nina remained firm in her convictions, and she and Perla started sharing with Perla’s husband, “Chino,” who had left Perla and was on the point of filing for divorce. And of course there were many other members of Tavo’s family whose lives were literally on the point of disaster.

So to make a long story short, just when we had resigned ourselves to the fact that even with the changes that were taking place in Tavo’s family there was nothing we ourselves could really do but pray, we got a phone call from Beto, which can roughly be translated like this: “Hey! You guys gotta get over here! Quick! Nina’s mother-in-law and Perla’s husband want us to do a home group session in their house tonight! They’re both asking for prayer!!”

Now: To this day, we still can’t figure out exactly what had happened there, or what exactly the events were that lead up to that phone call. The only thing we do know is that instead of scratching our heads and trying to figure it all out we just hopped in the car and started off to Nina’s house, (with a bit of fear since we had been warned “not” to go there,) but where we were met with a room full of Tavo’s family – all of whom received salvation, a powerful touch from the Spirit, and deliverance from demonic influences by the time that night was over!

“What?! Could you explain that last part, please?”

And there’s more. For those of you who are still left wondering about Tavo, we’ll tell you about him in our next article. (Ha! 🙂 ) For now, we’ll just remind you to praise God with us for His goodness, because, as we’ve demonstrated here, we certainly don’t understand or try to take any credit for the things that God’s doing here!

To close we’ll say that we’ve now been having home group in Nina’s house for more than a month, but only just the other night we saw something in her eyes that we hadn’t seen before – Instead of the fear that we had all gotten used to, we saw… hope. For the first time. And that is perhaps the greatest miracle of all… To see hope, in even Nina’s eyes, the kind of hope that only God can give.