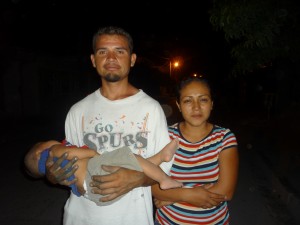 We just wanted to send out a quick prayer request for our friend, Ivan. He has been struggling for some time with serious addictions to several kinds of drugs.

Though it has been hard, Ivan has been working to gain victory over his drug habits, and we’re happy to report that he’s stayed totally clean during these last few weeks.

The only problem now is that we’re worried about his immediate safety due to the fact that he’s trying to drop his contacts with the particular drug-trafficking group he used to give business to.  Ivan was not a seller, he was only a client, but even so it’s hard to get out.  We are especially concerned because a friend of his was shot and killed a few weeks ago, less than a block from Ivan’s house, apparently because he’d been trying to buy from two different trafficking groups.

As for Ivan, he has told us that recently some of the group members from his neighborhood have made threatening comments to him and seem to be going out of their way to drive by his house.  So, Ivan and his family need God’s protection. We know beyond a doubt that God is able to protect him, but we do ask you to pray that Ivan would have the wisdom and the will power to handle his circumstances,  and even more importantly that they would drive him to continually seek God.

Please also pray that the church (the Expo Vineyard) would continue to minister boldly in the neighborhood, sharing God’s love, shining God’s light, breaking the power of the darkness, and continuing to transform the spiritual atmosphere there…