We wanted to thank you for your prayers for us and our ministry, and just share a bit of encouraging news. 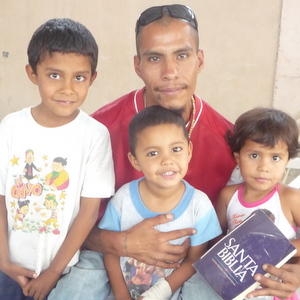 Mario with two of his kids and his younger brother – about a year ago, shortly before he was captured.

Several of you have asked for updates about what is happening with Mario, the gang leader who made a radical conversion to Christ, and was then kidnapped by the drug cartels soon afterwards. Over the last few months we’ve had to say that there were no reported sightings of him, which would normally mean that Mario was dead — his body waiting to be identified as one of hundreds buried in hidden graves.

…However, we have kept the faith, and we know that you also have continued to pray.

We’re glad to report that this week we were told that he has been seen, and though he’s still under the power of his kidnappers, our friend actually appears to be all right.

Please continue to pray for Mario. It has now been almost a year since he was captured, and he has almost always been seen in areas where the fighting is fiercest. This has led us to believe that, like so many other youth, he was captured only to be used on the front lines of the war between drug cartels.

But God has a greater purpose for him, and we’re continuing to pray for God to use him to touch people within the cartel, and for him to be miraculously released as soon as God sees fit.  (The fact that Mario has been allowed no contact with his friends or family since the time he was kidnapped assures us that he is still being held against his will, and has not yet been “brainwashed,” or fully indoctrinated into the cartel.)

…So thank you, brave readers… for praying.

Once again, your efforts have paid off.

…And God is still working.