Are we still talking about Christmas…?!

Well, yes! …As a matter of fact we are only just now receiving the cards that some of you sent from the States, so we thought we’d send you something in return…!

We were determined to stay in Mexico even through the holidays after our last long trip to Texas.  And of course there are a lot of things that have been happening  here… all of which we will have to write about in a newsletter to come.

…But for now here is a very belated Christmas story which we think is worth telling, but which we have only just now had time to share.

…How was your Christmas? …A few Belated Thoughts

“You do realize we are not going to make this?”

… It was Christmas Eve. Our friend who’d been expecting us for her get-together had called about a million times already… but for some reason our ten-month-old Jonathan had not gone to sleep and was unusually cranky, preventing us from doing anything to actually get ourselves dressed and out the door.

By the time we looked at the clock it was already quite late. Getting on past midnight, in fact.  And though the Mexican parties did often tend to go until four in the morning on the night of the twenty-fourth, we knew it didn’t make much sense to take a 10-month-old at this point.

…Though unfortunately neither one of the kids was tired.

As things had turned out, we had found ourselves sort of aimlessly climbing into the van anyway.  We knew all the while that we weren’t going anywhere, but we were not sure quite what else to do. By this time of night the van was warmer than the house.

Now fine but still not close to sleep, Jonathan was pulled up on the steering wheel making all sorts of happy noises as he watched the neighbors set small fireworks off in the middle of the block. Even more daunting was the fact that our three-year old Karina was becoming increasingly hyperactive in the back seat, far too excited to be able to go to bed any time soon.

Suddenly, I had an idea.

“Larry…” I ventured quietly. “Why don’t you bring the nativity scene?”

“You mean… Out here…?” He was obviously a bit thrown off.

A little resigned, Larry ventured back into the house and emerged with the box of wooden nativity figures that had not gotten quite set up under the Christmas tree. Taking Jonathan in the crook of one arm and Karina in the other, he proceeded to tell a simple yet incredibly poignant version of the birth story of Jesus, somehow manipulating the small wooden figures around the steering wheel with barely a hand to hold them while the two children looked on in his lap, fascinated by the scene.

I myself had fallen asleep during some part of the story, and the next thing I knew was that Larry was gingerly waking me to watch Karina for a moment while he put the baby down inside. I watched her as she continued to play and play with the nativity scene, while still hanging by one arm on the ever-present steering wheel. 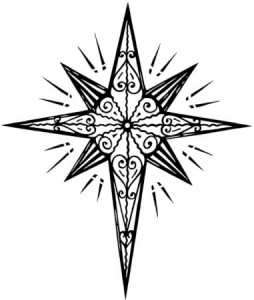 “Mommy!’ she said suddenly, and in a voice much too loud for that time of night. “Let’s play for real…! We can pretend that this is the baby Jesus.” She held up a package of wet wipes. “I can be Mary… and you can be Joseph!”

“O.K…” I was agreeable enough, knowing it would at least allow Larry to get Jonathan settled inside and take a 15-minute nap himself before we started the two-person job of getting an over-tired Karina into bed the night before Christmas.

“Oh man…!” she began, and quickly cradled the package of wet wipes in the crook of her arm to her three-year-old body. “He wants to nurse again…!”

Laughing and wondering if I really sounded like that every time I had to nurse Jonathan, I replied, “Yeah. …It’s what babies do!”

Suddenly I was struck by the thought of a truly newborn Jesus, in contrast to the perfect little smiling figures I had seen in so many nativity scenes. Certainly, so many images of the Christ child were a far cry from a baby only hours old who can just barely grope for sustenance from his mother’s breast.

But before I could really direct my thoughts, I heard a sudden gasp at my side, “Ew! …He’s poopy…!”

A little taken aback, and wondering if this were blasphemy, I quickly responded, “Well, gosh, Mary, you’d better change him before he gets a rash from all those icky, nasty swaddling clothes!! …Don’t worry, I’ll hold back the cows while you clean him up.”

…And by this time I could not hold back my thoughts… And still can’t, about how this all must have really happened… Because it was real, and true…

And so was Jesus.

…Thoughts about how a fifteen-year-old Mary, under the threat of being stoned to death for adultery, said yes to being impregnated by the Holy Spirit.  How many times did she have to stop to go to the bathroom on the side of the dusty trail as she rode on the back of a donkey over the 65 miles from Nazareth to Bethlehem? How often did she have to stop to eat?

…And how did Joseph, a presumably innocent guy in the reserved Jewish culture at the time who most certainly knew nothing about the birthing process, suddenly become a midwife in the middle of the scene, to a girl that he didn’t even really know well? …Or did somebody go get the stable guy’s wife in to help?

… And who cleaned up afterwards, in a stable full of hay and afterbirth?

“But Mary,” I said, suddenly reverting back to our play world. I found my tone matter-of-fact with Karina. “I have to ask you something.”

Still in her world, she looked up. “Yes, Joseph,” she responded.

“…Doesn’t it make you sad that Jesus will have to die on the cross?”

And of course I knew that Joseph and Mary couldn’t have known everything at the time… But now Karina was the one who had stopped. “Yes.” Her response was completely serious. “Yes, yes it does make me sad…”

Then she paused. “But there is nothing we can do to stop him, Joseph…” she said. There was conviction in her voice. “Because he wants it that way… He wanted to die for our sins.”

Immediately tears hit the backs of my eyes.

…And truly… What kind of a God would expose Himself to the helplessness of being a newborn  — to diaper rashes, and a cross… just to be close to me?

Certainly, a totally strange, crazy God.  A God with a plan.  Desperate to be close to me — And to somehow strangely forgive my sins.

But Karina was right… It was what He wanted.

…And praise the Lord.

Nothing could stop him.